Sept 8 Exploring off the PCT

About 3.5 miles
About 700' vertical gain
Last night I talked with other hikers nearby. Although we had each heard from independent sources that the trail was closed at Forester, our local ranger insists it is open. But she also says it's miserable and that roads are closed, so even if I went through I might not be in a better spot.
I decided to walk back towards Horseshoe meadows, a spot where I can catch a ride north. But in the meantime I'm camping and exploring along the way.
The ranger was kind of cranky, which I suppose is understandable at the end of the season. She blamed Wild (the movie and book) for a noticeable increase in stupid hiking mishaps. She says they have had quite a few rescues of people making mistakes because of ignorance. Its weird, after almost 4 months of daily hiking, of needing and wanting to get my miles in, to be taking a break. I don't quite know what to do with myself.
I've set up camp, taken  few dozen pictures, am writing this blog and I still feel like I need to learn how tone present in this beautiful place.
Posted by Unknown at 6:19 AM No comments:

Elevation gain 2376'
Mile 760
19 miles
I woke up hoping I'd be feeling better and in fact I felt great. When I started hiking uphill I was fine. No staggering 100' and collapsing! I think this problem was an acclimatization problem, and yesterday's rest helped.
I hiked over to trail pass (a possible escape route) and decided to continue on. I have food for the next 150 miles IF I can make 18 mile days. But I've learned that it's much more practical at these elevations to make 15 miles. Without enough food to make VVR I'll have to get off trail at Kearsarge Pass.
There are more hikers than I've seen in a long time. They all tell me that smoke from forest fires is closing Forester Pass. By the time I reach Rock Creek it's clear I can't go on. But this time it's not my fault!
So I still have 5 days of food, the ranger said I could explore this area, and it's stunning. I think I'll just take a few days and not worry about making my miles.
I'm camped near a couple of fellows and we have a nice chat around a campfire.
Posted by Unknown at 8:30 PM No comments:

Sunday Sept 6
2200 vertical feet
10.87 miles
My worst day - by far - on the trail. This was like a replay of my last hiking day on Oregon, only much worse.
It started out well. Last night a Southbounder came by and stopped for the night. His name is Orange Crush, and he has already through hiked the AT this year and should be reaching Mexico by the end of sept. Plus, no hitching, boots on the ground the whole way. And he's a nice guy.
I slept well and the trail out of camp wasn't too bad. But once again no energy. I would walk 100' stop for a minute, and walk another 100'. I began to worry if I was going to make it out.
Some other hikers came by and I realized I'm trying for 17 miles day in the roughest section. So I decided to stop early. Shorter days means I won't make my resupply in time, but I can come off the trail earlier if I need to.
Overall I feel tired, especially when going uphill. So I'm camped early at Diaz creek.     It's a beautiful spot and I hope things improve tomorrow.
Posted by Unknown at 8:30 PM No comments:

Sept 5
Mile 739.82
Mileage 17.43 miles
Elevation gain 3233'
It's been about 6 weeks since I was last hiking, and a long time since I have hiked above 10,000'. It's pretty demanding.
Fortunately the weather is great, although last night was pretty cold at 21F. I'm still hiking in shorts during the day.
At mile 750 I need to have all my food in the bear can. I borrowed a larger can from trail angel Russ but it is still not enough. The problem is that I'm trying to go 175 miles, steep, high elevation miles, carrying 9 days of food.
Posted by Unknown at 8:28 PM No comments:

Sept 4
Campsite 713.39
8.73 miles, 3.5 hrs
2365' elevation gain
Nice to be on the trail again. Russ drove me to the airport where my missing bag was retrieved. Then we drove 2 hrs to Kennedy Meadows store. When I walked onto the porch I saw Lost and Found! So exciting. He filled me in on trail conditions and I was off and hiking by 3. Camped at Monashe meadows.
Posted by Unknown at 8:28 PM No comments:

Back on the Trail

Back in Late July I was in Northern Oregon, and running out of steam. Fast forward 6 weeks and I am headed out to the High Sierras, hoping to finish a section I skipped back in May.

I'm still not sure what happened in Oregon - perhaps it was poor nutrition, perhaps it was a mental thing, maybe something else - but now I've re-gained some weight and and am curious about seeing the Range of Light. I fly from Buffalo NY to Bakersfield Cal on Thursday September 3 and am being picked up by a trail angel, who is most graciously letting me sleep on his couch. Friday, September 4 he is driving me up to Kennedy Meadows South, where I left my bear vault on Memorial day.

On my last trip through this section there were reports of heavy snow fall. Now, the reports are of meagre water sources. So my challenge for the next few days will be to get 40 miles up the trail past the dry creek beds.

I had planned my food drops for spring, but those have all been repurposed, so my food strategy is changing. I'm hoping to make it straight through to VVR in one go. That's a long ways, about 175 miles. Plus I get the privilege of carrying a bear canister at about 2 pounds. So when I leave Kennedy Meadows I'll have an unwieldy load. (Plus the altitude, which jumps right up to 10,000' plus in the first few days and crosses passes that exceed 13,000'. What was I thinking?)

On the plus side, bugs are reported to be negligible, river crossings will be non-events, crowds will be thinning, and, I'll be in the high Sierras!

Here's the short version: I'm off the trail for this year.

Here's the longer version. While I was still enjoying myself, I found it harder and harder to make the miles I used to make, and need to make to stay on schedule. I was simply out of gas. Previously, I would be on the trail by 6 or 6:30, and by 10 I would have made 9 or 10 miles. Now I found I was making 5 miles in that time, and I wasn't enjoying myself. This happened day after day after day - simply out of gas.

Central Oregon had been a great break from the trail. I spent two days (two rainy days!) with Dory, and then a third rainy day with an old climbing pal. He dropped me off on the trail, I walked a day and a half past the Three Sisters (10,000' + volcanic peaks where I used to climb and explore) amongst absolutely beautiful scenery, and was picked up by another old friend who lives in the town of Sisters. Together he and I slack packed (hiked without packs) from McKenzie Pass to Santiam Pass, with both evenings spent at his very comfortable house. I got plenty of rest in Central Oregon.

After I started hiking North from Santiam Pass I had a hard time keeping going. Conditions were fine, the trail was nice, but I had no energy for hiking. By the time I got beyond Jefferson Park, I was thinking about bailing out. At Highway 26 I managed to sweet talk my way into a ride into Portland.

I'm not sure what or why this happened. I have lost more than 30 pounds, and while I was in great physical shape I'm pretty sure I am not in good nutritional shape. Maybe nutrition played a bigger role for me than I had expected.

Over the course of 3 months I had walked just over 1400 miles. Due to snow I skipped ( and want to return and complete) the high Sierras. I skipped the 220 miles from Old Station to Etna (Hat Creek Rim and the area around Shasta) when I left to attend a wedding. I hiked most of Oregon, only missing the final 60+ miles to Bridge of the Gods. And of course, I've missed all of Washington.

I like the idea of becoming a section hiker, and am looking forward to spending 3 or 4 weeks in the coming few  years doing these missing sections. In a way, it's like being able to continue my relationship with the trail and the trail community a bit longer. 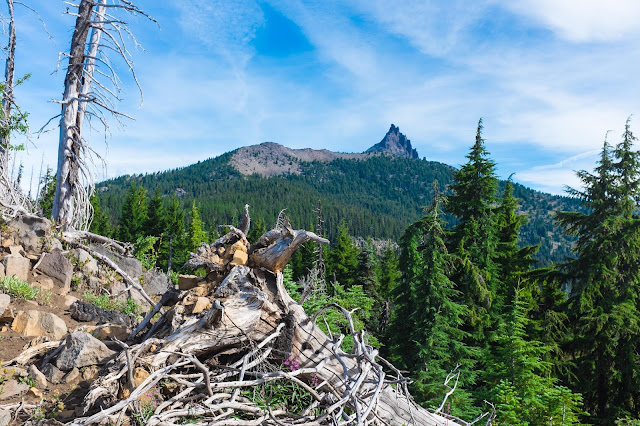 Three Finger Jack from the south 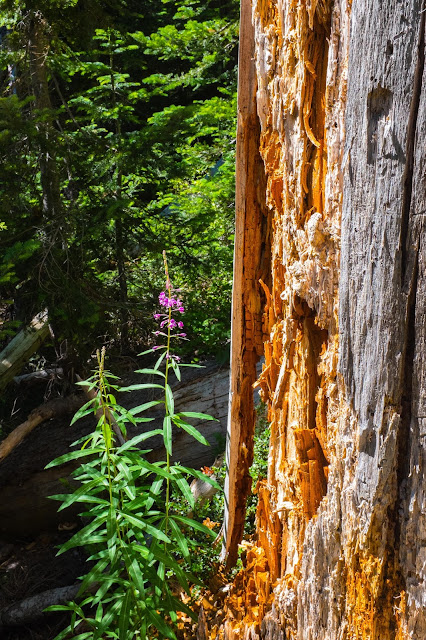 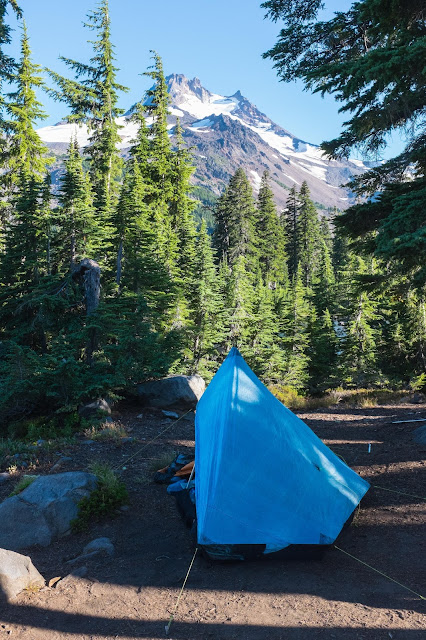 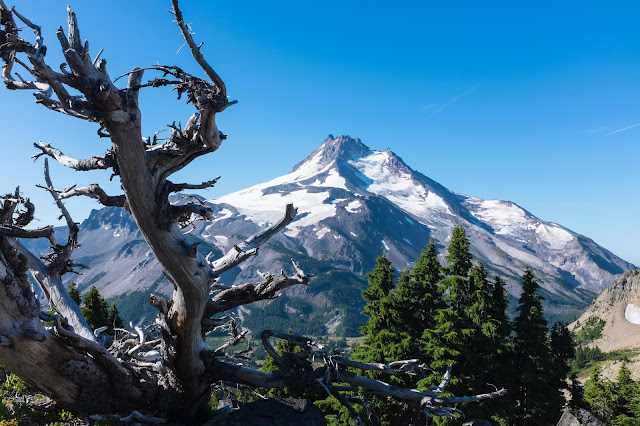 Mt Jefferson from above Jeff Park 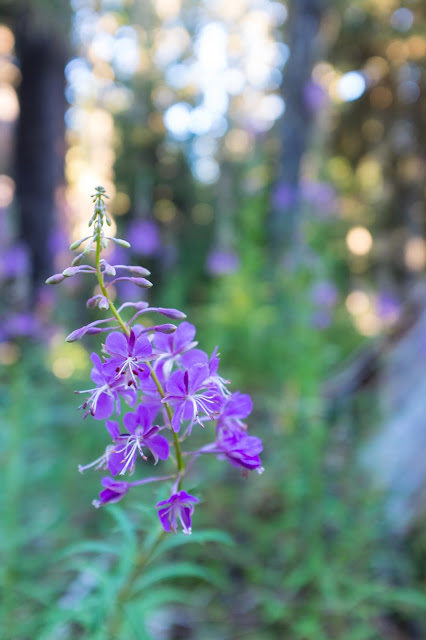 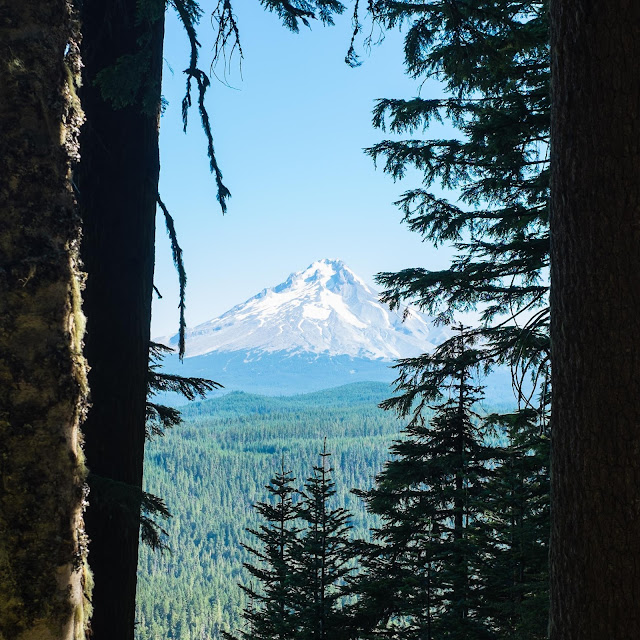